You are here: News Behind the Scenes of Academic Decathlon

Behind the Scenes of Academic Decathlon

Generally speaking, there are many wonderful academic competitions out there. Go prove you’re the best writer, or the best physicist, or the best speller. Academic Decathlon isn’t about any of that, though. It is not about demonstrating how good a student you already are. It’s about daring to push limits and to master college-level material. AcaDec is also a great way to practice skills, like public speaking, that might be wholly new. And it’s about the people met along the way.  Notably, the coaches who will mentor, the competitors who will challenge, and the teammates who will become lifelong friends. 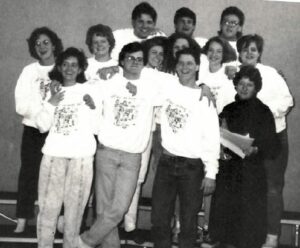 On the whole, decathletes study and test in seven areas: math, language and literature, science, music, art, economics, and social science. Additionally, students give two speeches (a prepared and an impromptu). They write an essay, and participate in an interview. In must be noted that Gross Catholic has been competing in Academic Decathlon for over 30 years, led by English Teacher, Mrs. Teresa Dorwart.

The Academic Decathlon team recently competed in the State Competition. In normal years, students travel to other schools for scrimmages, regionals and state competitions. This year, due to health precautions, students gave speeches and then completed interviews with judges via zoom. The following day they tested in 7 different categories. Students compete at 3 different levels of competition based on their previous 2 years GPA.

Significantly, the team ended the competition as State Champions for Class B. The top scorer from Gross Catholic is Amy Conner. Amazingly enough, Amy has been competing on the team since her Sophomore year. She decided to join the team because she loves to learn new things and is very competitive. To be sure, Academic Decathlon is the perfect combination for Amy. Truly, “The biggest thing I have learned during my time on the team is how to study effectively, as well as how to manage my time.”

Going forward, the team will now prepare for the online nationals competition that held in April.