You are here: News Jesus Is a Robotics Pro

Jesus Is a Robotics Pro

It may be bold to call one of the Gross Catholic teams a “Genius Robotics Team,” but it is rather accurate. It takes genius engineering, knowhow, and skill to rank number four in the entire world. Hence, “genius” is a moniker that fits.

Andrew Jesus’ mom knew that he enjoyed taking things apart and putting them back together. So she signed up Andrew for a robotics camp at Gross Catholic when he was in 7th grade. Remarkably, on the first day of camp, Andrew called his mom and asked for money to attend the next camp. Six years later, his team, “Lochnut Monster” made it to the top five in the world. 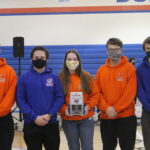 Team Lochnut Monster consists of Andrew Jesus, Jeff Treu, Chris True, JP Jansen, and Keegan Shanahan. Andrew currently leads the group in designing, building, programming, and driving the robot. The team ranked as high as number four in January. The system that ranks robotics is also used in chess and other zero sum games to predict a player’s skill. The rankings constantly change because of the highly competitive nature of robotics. However, as of February 24th, Gross Catholic still has two teams in the top twenty. Additionally, Gross Catholic has five other rated teams.

According to Mr. and Mrs. Jesus, “We have seen Andrew grow so much with robotics. Each year the game or challenge changes. The team has to build a new robot and document the journey in their engineering notebook. This has led to friendships across the country.”

When game rules are published each summer, Andrew immediately texts friends he made through robotics to brainstorm ideas. It’s important to realize that tournaments are designed to promote collaboration. Teams are randomly paired with another group and are required to compete together. Through teams’ communication, strategizing, and scouting each other, friendships naturally bloom. 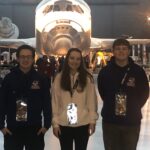 His experience making robotics friends globally began when Andrew was a freshman. At that time, the Gross Catholic team traveled to China and placed second at the world championships.

In order for Andrew and his team to be successful, they all have committed themselves to excellence. Team Locknut Monster spends countless hours in the robotics lab building, refining and scrimmaging against each other. This persistent practice takes place almost every day after school and on weekends, not unlike a sports team practice schedule. The time and effort is evident when Gross Catholic competes in tournaments. This year, it isn’t uncommon that Gross has four teams in the semifinals. Also, quite often, teams from Gross compete against each other in the finals. “It is the strength of all of them that push them to be as good as they are today.” stated Mrs. Jesus.

Andrew will continue his education at Iowa State. His interest in robotics led him to decide to major in engineering at the university. His love of robotics will not be put on hold while Andrew is studying in college. He and his friends will compete in BattleBots. You may have seen the competition on TV. Teams build robots and compete head to head against each other in an exciting arena.

Robotics engineering in general is one of the fastest growing careers in the world. Robotics engineers such as Andrew and his team have a great opportunity to forge their path in that new world. The future looks bright. And Gross Catholic genius robotics team members definitely have a say in that future.

If you’re not already a Cougar, you should be one. Learn more about us and then let us know if you have any questions. We’d love for you to join our cougar family!