Buried in the sobering Nation’s Report Card for 2022 is a morsel of data that should please parents of Catholic school kids across the country and in Nebraska.

The nation’s Catholic school students weathered the pandemic better than their public-school peers.

They achieved higher scores, overall, on the National Assessment of Educational Progress math and reading tests than public school students.

And, according to NAEP results, they experienced less learning loss compared to pre-pandemic achievement levels.

“Test results show that students in Catholic schools, including those in the Archdiocese of Omaha, achieved higher scores than public school students.” 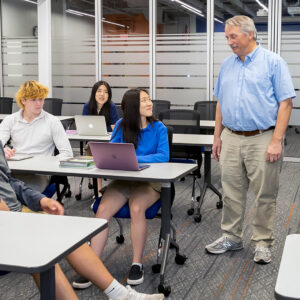 Students in the Archdiocese of Omaha followed that trend, taking a hit from the disruptions but bouncing back well as Nebraska educators in public, private and Catholic schools succeeded in restoring in-person learning ahead of other states, said Megan Fiedler, facilitator for curriculum and assessments in the archdiocese’s Catholic schools office.

While the Nation’s Report Card does not drill down to show how Catholic school students in Nebraska performed, other tests shed some light on how those students weathered those disruptive times.

In short, they weathered it well, according to test-score data provided by the archdiocese education office and a national testing organization.

The archdiocese encompasses 23 northeast Nebraska counties, including Douglas, Sarpy and Washington. It stretches as far west as Stuart, Nebraska, about 200 miles northwest of Omaha.

Instead, students take an assessment called the Renaissance Star, and their scores can be compared to how millions of public and private school students across the country fared on the same test.

During the first full year of the pandemic, 2020-21, students in archdiocesan schools showed significantly greater math and reading growth than the nation’s Star test-takers in grades 2-8.

At the end of last school year, it was the same story.

Students in the archdiocesan schools showed greater growth than their peer test-takers in grades 2-8 in reading, and all grades but fifth in math.

Most telling, however, is the way archdiocesan students performed in math against their peer test-takers.

The Renaissance Star provides percentile ranks for its test-takers.

Percentile rank is a score that provides a measure of a student’s achievement compared to other students in the same grade nationally.

Ranks range from 1 to 99 and indicate the percentage of students scoring equal to or lower than the score of a particular student.

During the first full year of the pandemic, 2020-21, schools across the country incurred the most disruption from lockdowns and quarantines.

However, Nebraska educators, both public and private, made a concerted effort to get kids back into in-person learning, though some remained in remote.

For example, archdiocese fourth graders scored equal to or better than 68% of test-takers nationally. In sixth grade, their percentile rank was 55%, and in eighth grade it was 52%.

The following school year, 2021-22, disruptions were still occurring across the country, but they weren’t as widespread or severe. Nebraska schools, including Catholic, were operating near normal, while some schools across the country remained in remote or hybrid some of that year.

By the end of that year, the archdiocesan schools had widened their math rank margin over the other test-takers in the U.S.

In last spring’s testing, archdiocesan fourth graders boosted their percentile rank to 76%, sixth graders to 66% and eighth graders to 59%, relative to their peers.

Fiedler said their educators made a concentrated effort to keep math from sliding.

“We were concerned about the effect the pandemic was going to have, especially in math instruction, because that’s what we were seeing nationwide,” Fiedler said.

Students must master foundational math skills in each grade to move on to the next, she said.

The pandemic, however, left a mark on math, particularly in eighth grade.

“In 2021-22 Renaissance Star testing, students in the nation’s Catholic and other private schools scored in the 61st percentile in reading and early literacy and the 65th percentile in math.”

“We’re seeing that in that transition from our middle school to our high school,” she said. “We’re trying to figure some things out there still. We have some gaps in students’ math skills that, even though they’re not showing up maybe on the Star test, we know that they’re there.”

From the national perspective, according to Renaissance, the spring 2021-22 average percentile rank of tested students in the country’s Catholic and other private schools was 61% in reading and early literacy, and 65% in math.

That compared with public school percentile ranks of 38% in reading and early literacy, and 49% in math.

A closer look at NAEP scores nationwide shows a contrast between public and Catholic schools nationally when it comes to the slide.

Fiedler said all Nebraska schools — public, private and Catholic — benefited from the efforts to get kids back into in-person learning.

On the ACT college entrance exam, archdiocese students experienced a COVID-19 slide of just over 1 point on the 36-point test between 2019 and 2022.

The average composite score for archdiocese students dipped from 24.8 to 23.7.

The national average ACT composite score for the high school class of 2022 was 19.8.

Fiedler said that all archdiocese high schools are college prep and that “the majority if not all” students take the ACT.

Continue reading the story at the Omaha World-Herald and view the many pictures of Gross Catholic teachers and students in action taken by Gross Catholic Alum, Chris Machian.

*Learn more about Gross Catholic and how you could find your house away from home.